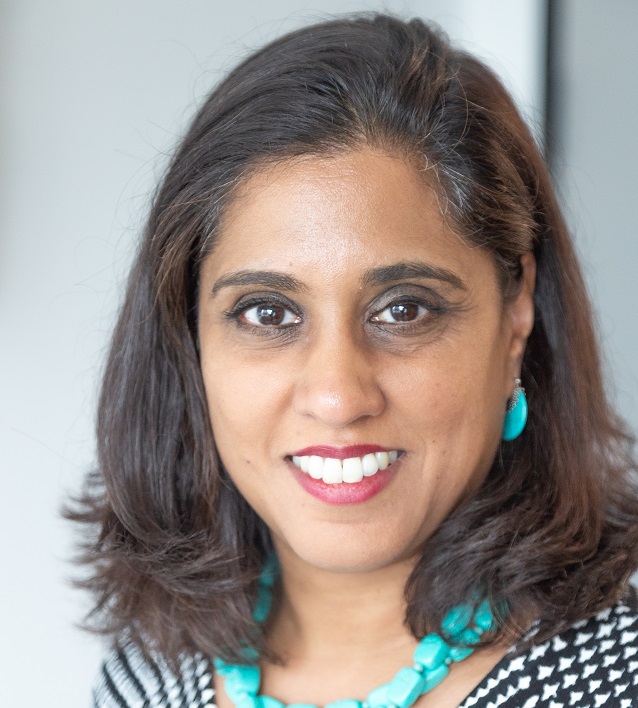 Out Teach Board Chair Shally Stanley is the SVP of Global Consulting Services and Solutions at Acumen Solutions, a Salesforce Company.  To help celebrate women in STEM this month as part of Out Teach’s #EducationIsOpen campaign, Shally recently talked with us about her STEM journey, and shared her ideas on how to empower and inspire the next generation of women in STEM.

As a child, Shally Stanley grew up in a house where Math and Science were always a priority.

Her parents made it clear that their children had two, and only two, acceptable career paths — medicine, and engineering.  Squeamish at the sight of blood, Shally decided fairly early on that engineering was her destiny.

Her father has a PhD in Mechanical Engineering, and constantly showcased how Math mattered in his children’s lives.  Whether it was measuring while cooking, estimating the amount of time a walk might take, or calculating how many candies were in a package, Math was a language spoken early and often at home.  In fact, one of Shally’s earliest “Ah Ha!” moments came when she was four, and her parents guided her to the realization that once you could count to twenty, you could count forever, following reliable patterns and building on a solid foundation of understanding.

But in elementary school, Shally’s interest in Math waned.  She hated arithmetic.  Year after year, her teachers followed very traditional instructional models for Math, putting values and symbols up on a chalkboard, and then having their students “drill and kill” simple problems to master addition, subtraction, multiplication, and division.  Gone were the real-world problems her father had her solving.  And though Shally was lucky enough to get a full period of Science every day in elementary school,  there was never any crossover between Science and other subjects.  Shally loved the real-world problem-solving of Science, but Math never benefited from the hands-on nature of applied Science, and Science never benefited from the data-collection skills students could have been building over in Math.

It wasn’t until middle school and high school that Shally began to appreciate Math again, when the applications of algebra, geometry, and trigonometry crossed over into Chemistry and Physics.  But it was also in these later grades where Shally began to notice other girls losing interest in STEM subjects.   Shally says “It bothered me at the time, but it bothers me more now.   Smart and hard-working young women opted-out of more advanced Math and Science courses believing that the classes were too hard for them.   It made me sad when I witnessed it at the time, because I knew that not only were these young women highly capable, but that they truly liked STEM subjects.  Looking back, I wonder how many of them could have gone on to become amazing and fulfilling STEM leaders. Who knows what contributions the world has missed because a 15 year old young woman wasn’t able to pursue her talents. These windows of opportunity close in high school, and it impacts the rest of their lives.”

This message that women didn’t belong in Math and Science was so pervasive in middle and high school,  Shally was soon the only girl in her advanced STEM classes.  Even Shally’s favorite teacher, one she’d had for AP Calculus and several semesters of Computer Science, would joke that women had no business in STEM.  Although Shally was one of his best and brightest students, and he ended up writing her a glowing recommendation to help her get into MIT, she was not encouraged to pursue a STEM career at school.

But in an interesting way, because they are very non-subjective subjects, Math and Science are great equalizers.  Shally says “I always felt like STEM subjects gave me a very level playing field.  Each has definitive answers to problems, I can tell when I’ve got something right, and if anyone wants to say they’re better than me, they’re going to have to prove it.  I’ve got the numbers on my side.”

Shally grew up in the suburbs of Detroit, and was one of the few students in her graduating class to leave Michigan to go to college.  She got her B.S. in electrical engineering from MIT, and is now an SVP at Salesforce, overseeing an international team of hundreds of people as they create software solutions that help their clients solve problems and grow their businesses.  “It’s amazing to think that the six years girls spend in middle and high school can decide the next 50 years of their lives.  I love my work, and I’m so glad for pursuing STEM when I was younger.”

It’s no fluke that Shally and her husband, a civil engineer, have raised four boys who are all deeply entrenched in STEM fields.  Following her parents’ example, she worked hard to ensure that her children saw Math and Science in their everyday lives, and she actively worked to build their problem-solving skills.  “As the kids were growing up, we were big on games, but not games of chance.  We looked for games where problem-solving, strategy, and Math take center stage.”

To help families build a strong STEM foundation at home, Shally recommends games that make kids think, such as:

As well as card games such as Euchre and Rook.

Beyond family game night, to really help her sons build their problem-solving skills, she tried not to let them look up answers to their questions about the world.  She says “Today, the answer to any question is a Google search away.  That can be a good thing, but the confidence and skills to “figure it out” is like building muscle. Kids have to develop those muscles early and keep them in shape.  So whenever my kids asked me for information, at the very least, I’d have them take an educated guess, or think through the issue enough to take a stab at a hypothesis and then test it.  It allows them to solve the problems they encounter tomorrow on their own.  Getting accustomed to the scientific method early on really changes the way you interact with the world.  Kids learn to learn, and realize they can empower themselves to take on new challenges and problems.”

“If I could change one thing about education,” Shally says, “it would be to have Math and Science linked together early on in a real and meaningful way.  That way, not only would all students appreciate, engage with, and enjoy each subject more, but girls in particular could build an unshakable STEM foundation before they hit middle school.  You don’t build your house during a storm.  Parents and teachers need to help all kids realize that they can belong in STEM well before the world tries to convince them otherwise.”

“My homelife gave me every single STEM advantage, but I still hated Math in elementary school.  Without my parents’ positive daily encouragement, who knows if I would have stayed the course when I faced resistance later on.”

A problem-spotter and solver to her core, Shally now chairs the board of Out Teach in order to help broaden and diversify the STEM career pipeline so that it includes more girls and children from under-resourced communities.  By coaching and inspiring teachers to integrate Math and Science during meaningful, hands-on, real-world experiences, Out Teach helps Shally share the gift her parents gave her with thousands of children across the country.  Shally says, “In my work, in my life, and in my view of the world, I have gained so much from my STEM education.  I deeply believe that every child deserves access to the same learning opportunities, and I’m committed to making that a reality for as many children as possible.”

The staff here at Out Teach would like to thank Shally for her commitment to STEM education, and hope she continues to serve as an inspiration to girls and young women considering pursuing STEM studies.