How a plastic bag of leaves can change the world 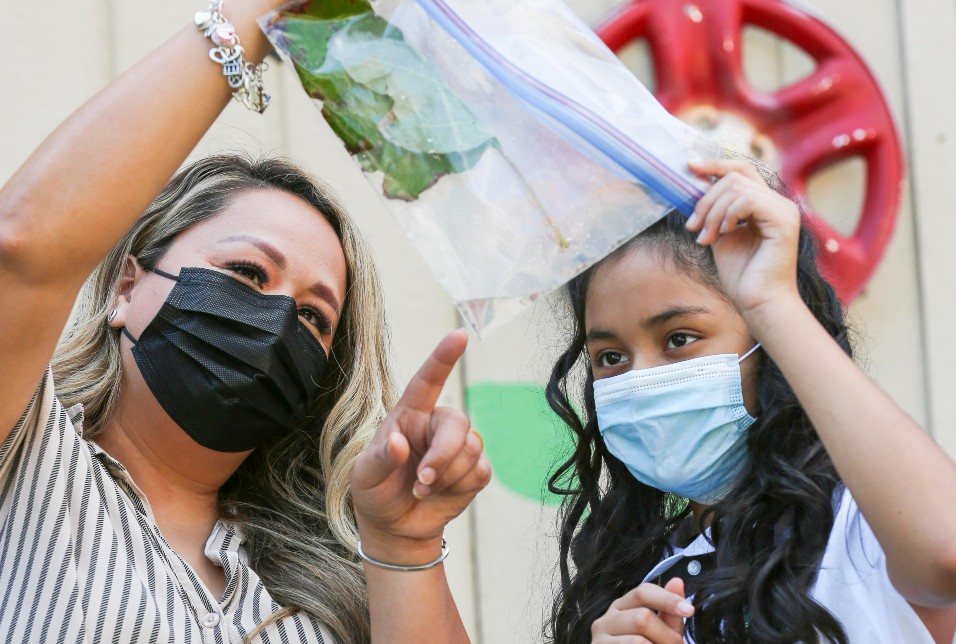 When 4th grade teacher Lucia Espinoza mentioned to her students that they’d be heading outside to build a device to collect hidden water, she was surprised when a girl named Jasmin came to school the next day so excited for the lesson she brought in her own plastic bag.

Jasmin hardly spoke in class, and hadn’t made friends. Earlier in the year, Ms. Espinoza was so worried about her she called home to learn that Jasmin’s beloved grandfather had recently died, and her family had been traumatized by violence while abroad.  It was no wonder she wasn’t participating.

But for this lesson, no one was more energized to begin than Jasmin.

Determined to succeed, Jasmin led her group’s collaboration and began to shine. As Jasmin asked informed questions, her group discussed different ideas and decided to capture water through leaf transpiration.  When Jasmin and a boy in the group hit a roadblock debating which leaves would produce the most water, Jasmin realized that her extra plastic bag meant they could bag leaves in multiple locations. Though it would mean twice the work in terms of the data collection and analysis, her group was excited to test different hypotheses, going above and beyond in the project.

After collecting data over the course of the day, and helping others use real-world math to perform the necessary calculations, Jasmin’s hypothesis proved correct. Her bag collected the most water!

What she does know is that she loves solving real-world problems.  She knows her voice and skills matter.  She knows that she can use science and math to thrive and help others. She knows that science is engaging, exciting, powerful, and 100% something she can do, because she’s already done it.  And she knows that being prepared and excited to learn can make all the difference, even when that difference is just an extra plastic bag.

Your commitment to Out Teach today ensures that we can continue to equip teachers and inspire their students through hands-on outdoor learning, ensuring every child gets the critical real-world science they need to thrive in the world.

Your generosity ensures that Jasmin and her classmates will keep learning lessons that last a lifetime. They’ll learn they ALL have a place in science and STEM.  They’ll know how to use science and work together to find solutions. They’ll appreciate the scientific process and the importance of accurate data, which everyone needs to be an informed citizen.  This isn’t about getting a good grade.  This is about children building the skills that transform lives, communities, and the world.

Thank you for your support.  We appreciate everything you do for students like Jasmine, and for every student who’s about to discover how much they love science, whether they brought an extra plastic bag or not.